The Immortal Life of Henrietta Lacks: Medicine and Morality

On November 14, David Lacks will speak at Whittenberger Auditorium. He is the son of Henrietta Lacks, the woman who was the origin of the HeLa cell. Rebecca Skoot's book  The Immortal Life of Henrietta Lacks discusses the ethical issues surrounding the use of HeLa cells. Here, Professor Jill Robinson, who uses the book in her "Ethics in Science" class, discusses its relation to Themester. 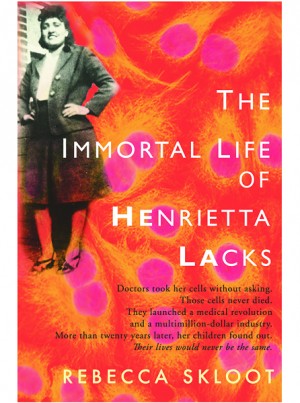 How does The Immortal Life of Henrietta Lacks fit into this year’s theme of "Good Behavior, Bad Behavior: Molecules to Morality"?

Rebecca Skloot’s bestseller The Immortal Life of Henrietta Lacks tells the story of the woman and scientific discoveries behind the HeLa cell line which has become one of the most important medical research tools ever discovered.  Henrietta Lacks was a black woman treated at Johns Hopkins for cervical cancer whose cells, taken without her knowledge in 1951, went on to become the first immortal human cells ever grown in the laboratory.

The book highlights many topics ranging from medical ethics to race to the commercialization of human tissue.  These are well suited to an in depth discussion of behavior and what can be classified as good or bad.  Medical research ethics is a main theme of the book and the behavior and actions of the scientists are described in terms of accepted practice at the time and compared to legal restrictions in existence today.  There are clear examples of bad behavior in the dark history of experimentation on African Americans such as the brutal experiments conducted at the Crownsville hospital for the Negro Insane where Henrietta’s daughter Elsie was a patient.  In contrast, many good outcomes have resulted from the harvesting of Henrietta’s cells.  The book addresses big issues such as bioethics, and the legal battles over “informed consent”, patient confidentiality, and individuals sharing in the profits of biotech products made from their own tissues.  Human behavior is also explored through an in-depth description of actions of those involved.

What are some of the major ethical issues raised by the book, and what solutions are offered, if any?

The major ethical issues are related to medical experimentation on humans, treatment of patients based on race, and tissue rights.  Solutions are not directly offered, but the issues are raised in a way to initiate thoughtful consideration from both a moral and legal perspective.

Have you used this book in your courses before this semester? What issues are most of interest to students?

I have not used this book before.  Issues that are of greatest interest to students are related to patient rights, medical discoveries, and race and class issues.

David Lacks will be coming to campus to discuss the book and his experiences. How did the loss of Henrietta Lacks affect his life?

From reading the book, it is evident that the family is very proud of their mother’s contribution to science.  At various points family members were very angry as they were not told their mother’s cells were alive and then researchers took samples from her children without consent.  They did not understand the science behind an immortalized cell line and could not believe that companies were making millions of dollars while they did not have enough money for basic health care.  In the end, it is clear that they simply would have liked to know their mother as a person and have her in their lives.  I hope to learn more through the interview.