Talking with Dr. Buchanan she was very passionate about her exhibit when we met up at the opening of “Archaeology  @ Work”.

What were the methods behind the creation of this exhibit? 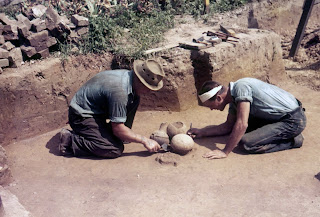 Originally I wanted the exhibit to be based solely on the work of WPA, the Works Programs Administration part of the New Deal, programs at Angel Mounds in Evansville, and the tools utilized. The goal was to have it show the WPA workers excavating the various sites. This turned out to be a lot more challenging than I had originally expected. The records and data were very easy to come by since it was a federal project, but there were not many photos of the workers actually doing the work. One of the best resources that was available were Glenn A Black’s notebooks that he kept while excavating the site. The system utilized was also very complicated because the workers dug in 10x10 plots so it was complicated to decipher where anything was specifically. Also there was not a lot of equipment that had survived to today.
It then became more about archaeology in general, encompassing all past Indiana University field schools along with other WPA excavation sites. Indiana University has a very impressive history with field schools such as during the 1940s to early 1950s they held field schools entirely for women. The exhibit itself is very relatable to students because the exhibit encompasses many of the basics in archaeology. Angel Mounds has a sister site in Illinois, Kincaid mounds. This was actually the site that I started my career researching and now it has come full circle with the installation of this exhibit.

In the future we are planning to reestablish field schools at Angel Mounds and are currently working on a site management plan. In the meantime we are digitizing old films and film clips about Angel Mounds that go all the way back to the 1930s.
Southern Indiana has actually had quite a few excavations which are depicted in the digital picture frame included in the exhibit. This will actually continue after the exhibit is taken down and be displayed at the desk of the Glenn A Black Archaeology Lab.

The exhibit “Archaeology @ Work” depicts the WPA at Angel Mounds in Southern Indiana and the history of IU field schools at Angel Mounds as well but also all around Indiana.


Posted by Themester, IU College of Arts and Sciences at Sunday, September 27, 2015 0 comments 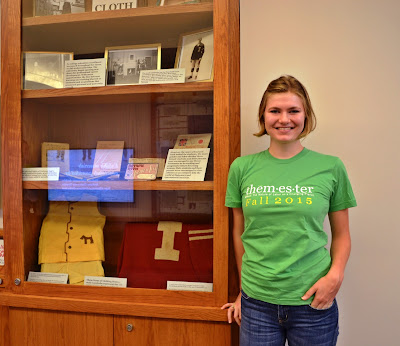 Claire Repsholdt is an English and History Major in the College of Arts and Sciences with a Minor in Communications in Culture and the curator of the Labor On Campus exhibit in the Herman B. Wells Library.

How did you get involved in this year’s Themester theme?
I was in a history class with professor Alex Lichtenstein and he was on the board for Themester so he was looking for interns who would be around for the summer who wanted to do an exhibit. He was vague but I wanted to work on an exhibit so I talked to him about it [and] got the internship. He hooked me up with the Indiana University archives and I started from there.

How did you select pieces to include in your exhibit / what was your process?
I was just looking – first I could have done anything with labor, but because I was working with the Indiana University archive I had a lot of information about like campus things, campus labor so I really wanted to focus on that because we had the best materials for that. I talked to Dina and Carrie, the librarians at the archive and kind of asked them about what I was thinking, that I wanted to do IU labor and they pointed me specifically to the Ruckle House archive materials because that’s the baseball team that went to Japan and that’s something they’re very proud of and it happened to be about athletic, physical labor and I thought that was an interesting angle. Then I started, after I knew that I had that, I was thinking about other things that I saw on campus today like that we are always under construction and I was really interested in the way campus grew to what it is. So I went on the limestone tour that they offer just to see what people were saying about it and tried to focus on buildings, so I picked the sample gates because there’s a lot of correspondence materials and information. So then I just tried to go from there on the campus side of things and I wanted to look at comparison to the physical workers so I looked at office workers. They had great office photos. And that was sort of the compliment to the physical labor and that led me into looking at the unionized labor, and it really all started with that baseball collection.

What do you hope students will take away from your exhibit?
I would love for students to – I have this image of people, since it’s so kind of map focused, if they are walking through campus to start putting the pieces together, calling attention to the labor as you’re seeing in the physical plant trucks who are usually – [we’re] like “oh we’re trying to be pedestrians why are you driving through here right now” but seeing that they’re doing a lot of work to maintain what’s going on and seeing the way that academic labor and all these things we complain about having to do are built on these really concrete things, like buildings, or like the athletes that are making money through advertisements, or the sewing students who are putting together clothes and office workers who are sending all of our stuff everywhere even though they have computers – just to call attention to the fact you are built on so many other people’s work.

What does labor mean to you?
The funny thing about doing an exhibit on labor is that I was laboring, so whenever I’m telling someone about my labor exhibit I have this urge to do puns like “an exhibit about labor that’s the fruit of my labor.” My labor made labor. I was very aware of all the work that I was doing weirdly. Labor to me is actually an underrated word, it’s huge in our lives and I think we don’t talk about it. We talk about hope, and what dreams do you have? And you talk about what inspires you but so little do we ever talk about what do you consider labor? What is work for you? I think what labor means is a challenge; I have to figure that out. I’m on a “journey” to figure out what it means. I think everyone should be.

What was your first job?
I worked at a shoe company: Rogan’s shoes. It was a family owned shoe business. They always run a buy one pair get the other half off sale, so if you ever come across a Rogan’s take advantage!

You can find Claire’s exhibit in the East Tower of the Herman B. Wells library to the left of the book returns desk.

Posted by Themester, IU College of Arts and Sciences at Tuesday, September 15, 2015 0 comments