Q: Why did you decide to become a student docent?
A: I’m interested in the IU Art Museum and I like taking tours so I thought it would be interesting to give tours of my own.

Q: Can you please give a quick run-down of the tour?
A: There are three pieces you look at on every floor. All of them are really diverse, sculptures, photos, etc., all from different times, all under Themester. Some are really practical, but they all go together.

Q: What do you think will be the favorite aspect of the people who go on this tour?
A: When you look at the art, you don’t really know what it is or what it was intended for. You don’t just get a lot of information and look at it. The tour guides lead you to guess for yourself what the artist intended.

Q: What’s your favorite piece in the tour?
A: There’s a woodblock print [of Americans baking bread] that’s my favorite because it’s Americans as seen by foreigners. We don’t usually get to see ourselves so it’s interesting to see how we were viewed back in the day.

Q: Has being a student docent had any influence on your life, besides the obvious time commitment?
A: It makes me think more about how food factors into my life, like what I eat and how I eat. It’s interesting to see how much of what you know about a different culture is based off of their food, like that’s the first thing you think of. A lot of our exposure to other cultures is their food.

Q: Can you give a further example?
A: We talked about how some pieces have been used in food festivals. You don’t think we have food festivals in America, but we have pumpkin carving and Thanksgiving which is almost completely centered around food.

Q: Why should people go on the tour?
A: Beyond it just being interesting, it forces you to analyze cultures and then your own culture. It will make you look at how your culture responds to food versus a historical or foreign reaction to food.

Q: When are the tours given?
A: It’s based on when classes want them. There is also the Honors College Mixer, when anybody can go on one. That’s on October 2nd, 6:30-8:30 pm. It’s free and open to the public.

Posted by Themester, IU College of Arts and Sciences at Tuesday, September 30, 2014 0 comments 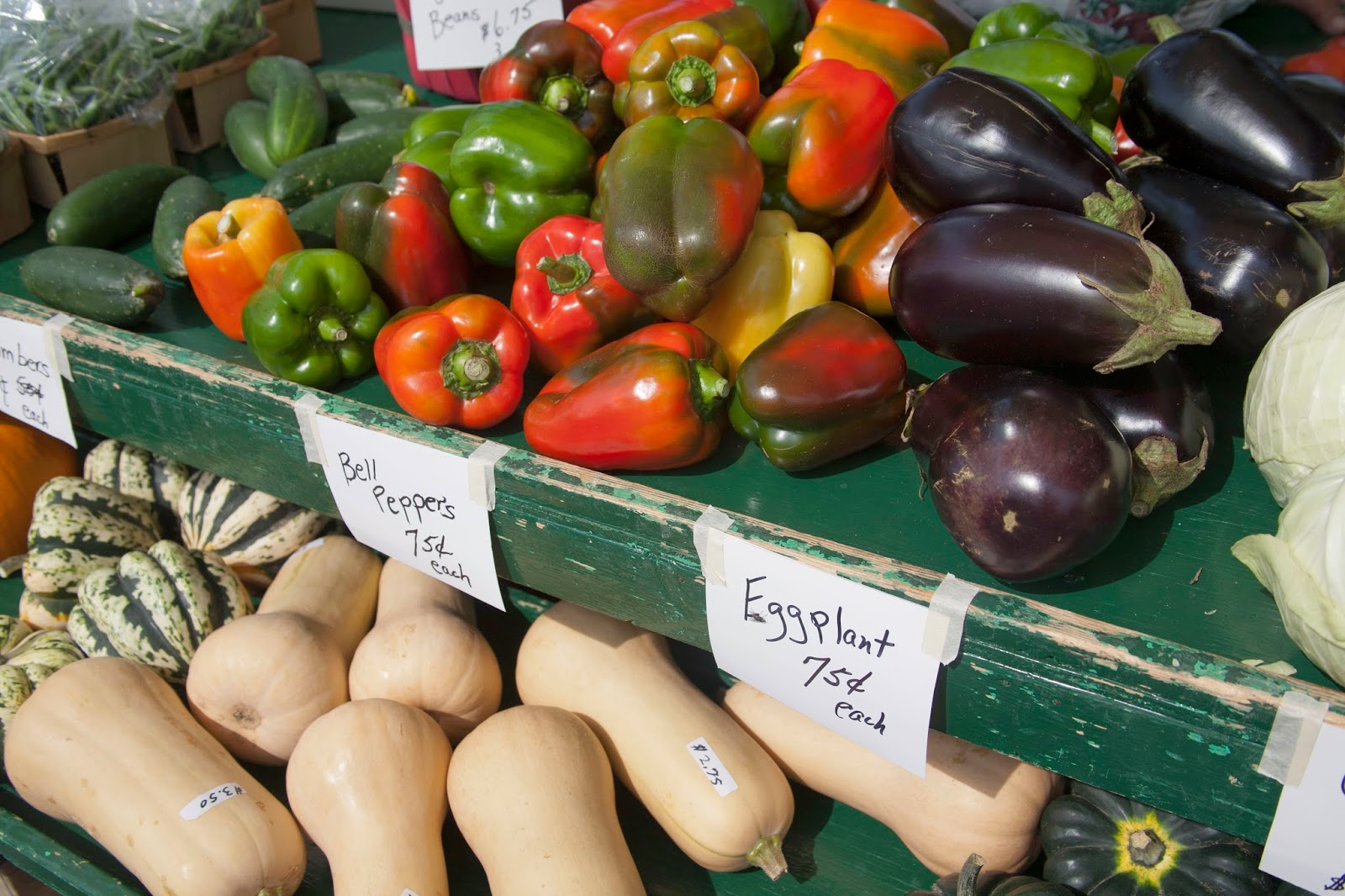 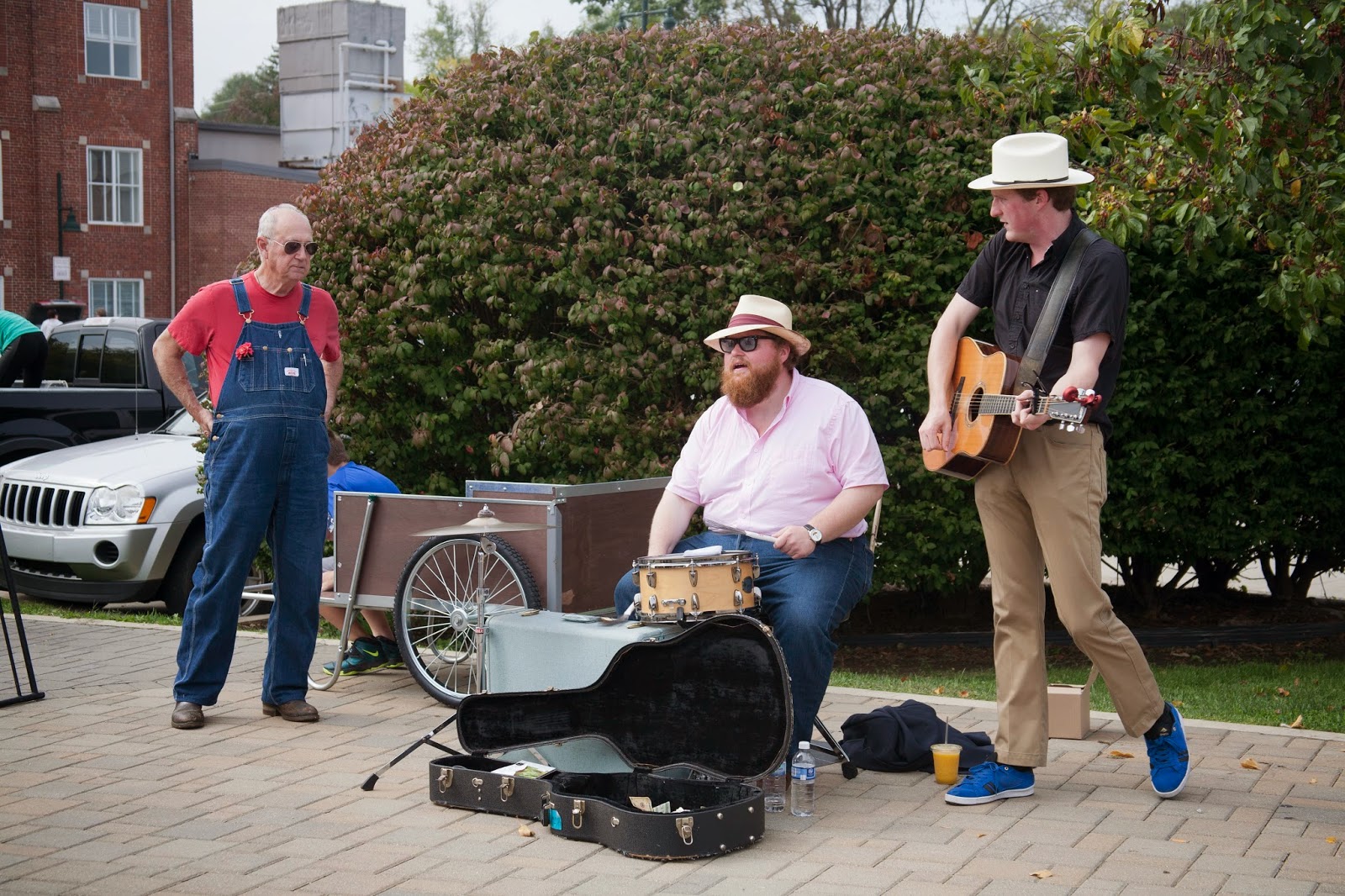 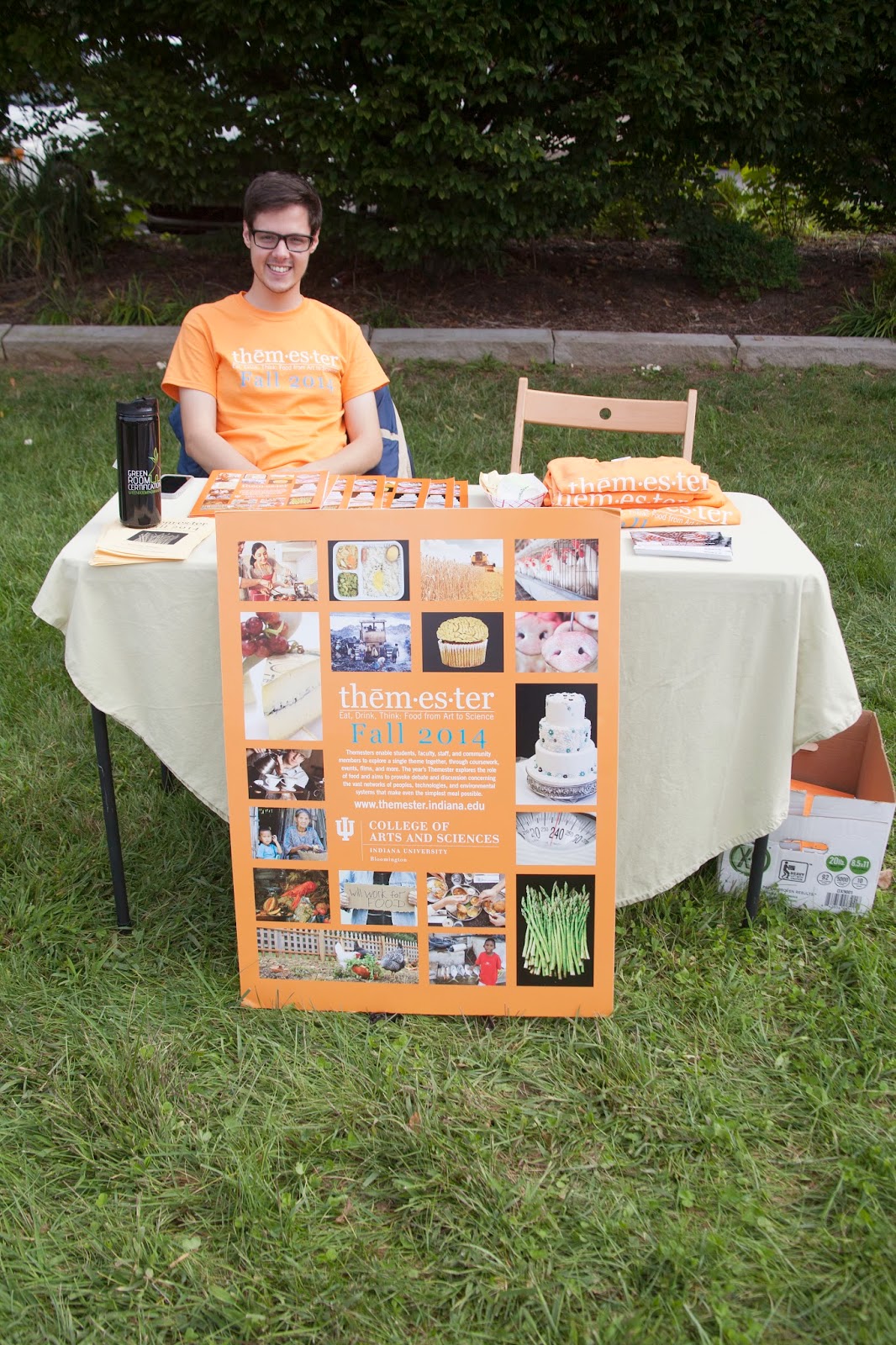 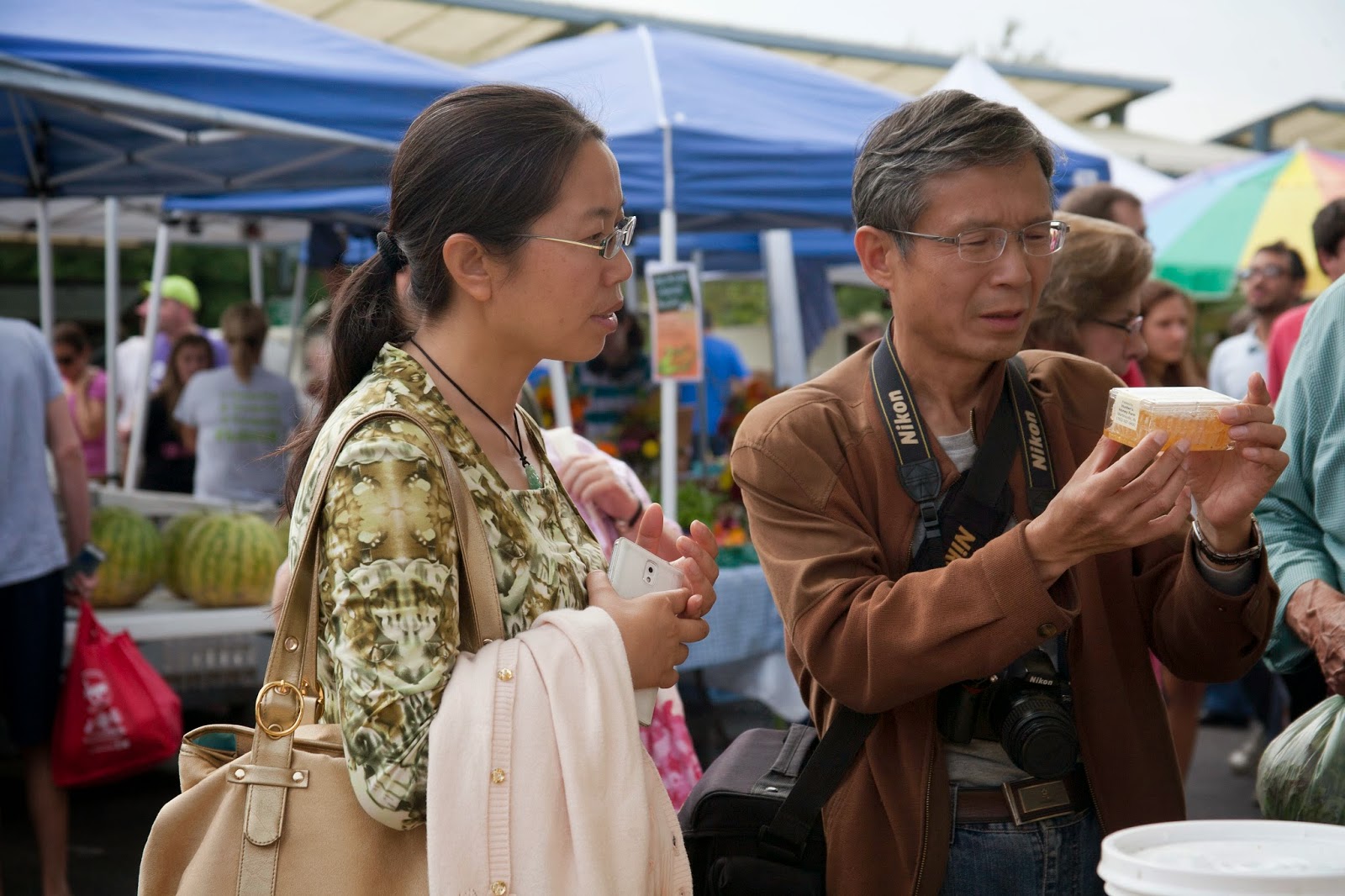 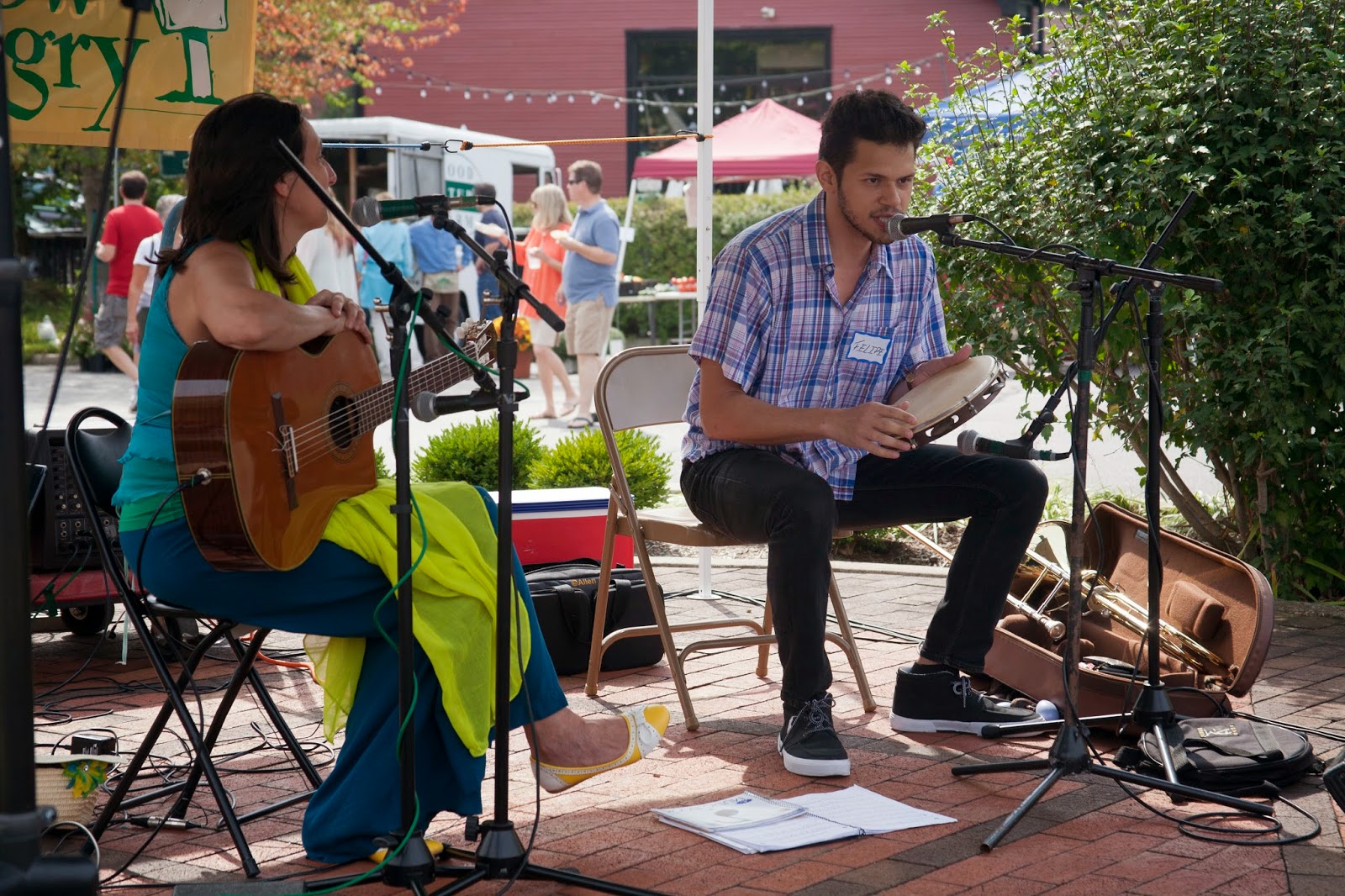 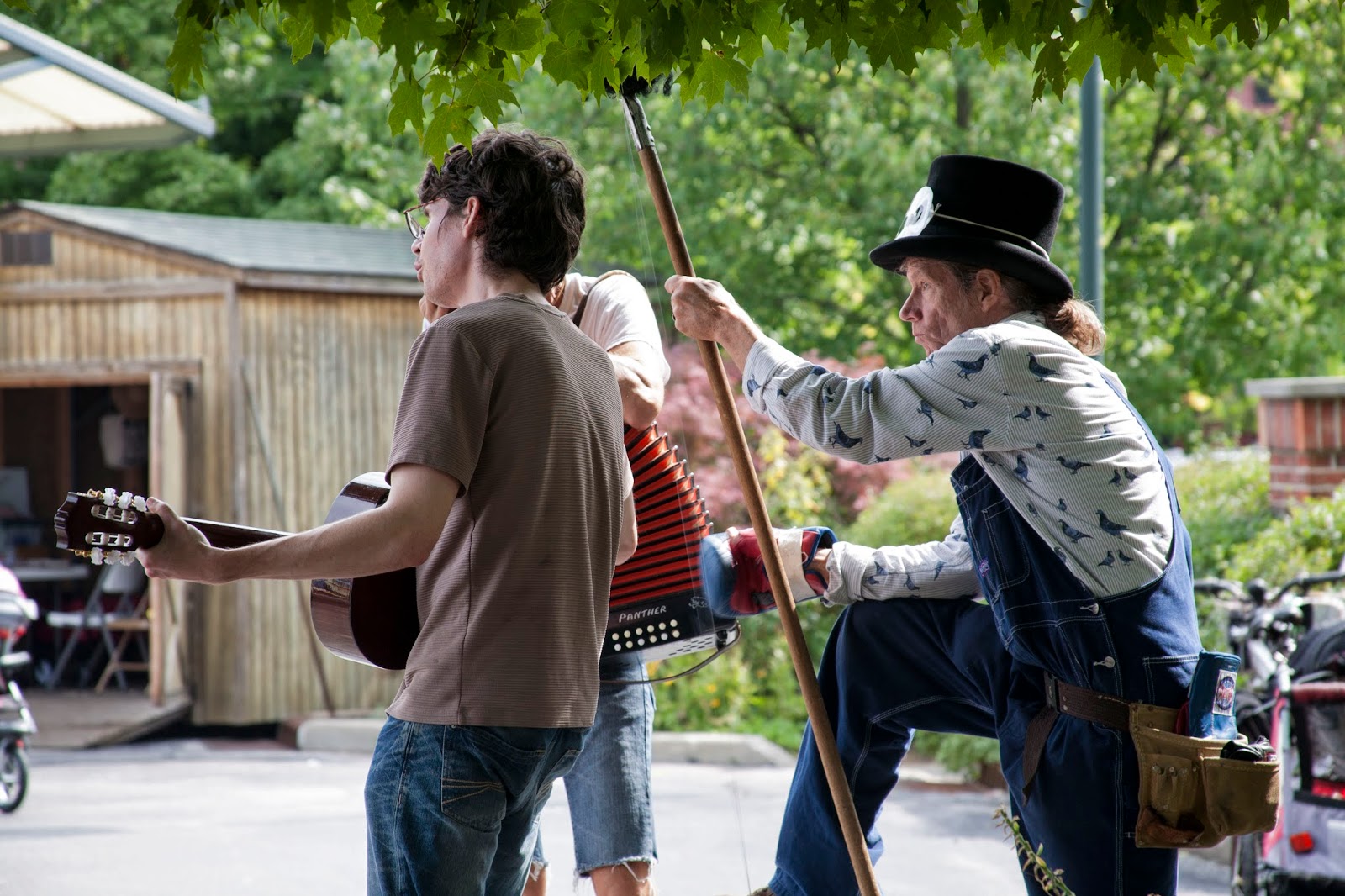 Posted by Themester, IU College of Arts and Sciences at Saturday, September 20, 2014 0 comments

James Farmer is an Assistant Professor in Recreation, Park and Tourism Studies within the School of Public Health. Farmer will be presenting his lecture, The Human Dynamics of Engaging in Local Food Systems: A Farmers' Market and CSA Consumer Perspective, this Tuesday at Finch’s Brasserie. A researcher of sustainable behavior, Farmer studies sustainable food systems, land conservation, and consumer behaviors in local food systems such as community-supported agriculture (CSA’s) and Farmer’s Markets.

Could you tell us about your lecture?

This lecture asks the question as to why do people engage or not engage in the two venues of CSAs and Farmers’ Markets. I try to gain a sense for what barriers might be in place that constrain or limit access--be it economic, cultural, or practical.

What I’m going to present on is data we collected in 2010 across the state of Indiana. We visited twelve Farmers’ Markets located in Bloomington, Madison, Richmond, surrounding areas of Indianapolis and northern parts of the state. We collected data from market consumers and people subscribed to CSA’s. We also collected data from people across the state that did not participate in either CSA’s or Farmers’ Markets. From these surveys, we assessed the values of those consumers.

What were some of the trends you saw among those who went to the Farmers’ Market?

Something like ninety-two percent of those who subscribed to CSA’s also go to the Farmers’ Market but only seven percent of those that go to the Farmers’ Market subscribe to CSA’s. Another thing is that people who subscribe to CSA’s are highly educated--around fifty-five percent had a graduate degree. That doesn’t reflect the normal population. Around forty-eight percent of CSA members had an annual household income of more than ninety-thousand dollars--which, the median household income right now is around fifty-thousand dollars in Indiana. There are some factors and issues of privilege. But there are a lot of CSA’s doing innovative things like changing the payment scheme and allowing for “ working shares” where members can work on the farm in exchange for part of their share. Many now offer subsidized shares as well.

And this is contrary to making one full payment at the beginning of the season, correct?

Exactly. That method has its benefits for the farmers but can sometimes limit the people that can engage with it. Proximity was another huge issue for those trying to attend the Farmers’ Market. For people who did not go to the Farmers’ Market, the closest market was about twice the distance than those who did go. It’s a convenience issue and we can’t have farmers markets on every street corner.

Most participants in our survey were younger. The CSA participants were notably younger with forty-four being the average age whereas Farmers’ Market participants were a little bit older. Ethnicity was predominantly white or caucasian--which is reflective of where the markets were located. There is a larger minority population in the Northwest part of the state but at that time there was only one farmers market within the Gary area. Now there are more markets in that region. If we conducted research again we may see more ethnic diversity.

Would that be attributed to an increase of Farmers’ Markets in general?

In the mid-70’s there was around nine markets in Southern California and now there are at least one dozen in L.A. County alone. It has grown an amazing amount. Between 1994 and 2012, there has been a four-hundred and forty percent increase in Farmers’ Markets across the nation. For CSA’s, it’s more difficult to give a percentage. The first two CSA’s emerged in the mid-80’s. Now the USDA indicates there are now twelve-thousand in the US.

Farmers’ Markets saw a decline in the late 1800’s and this was followed by a growth of grocery stores and supermarkets. The culture of the country was transitioning and markets kept declining. Farmers’ Markets hit the bottom in the 70’s--that is when there was the fewest markets on record. Part of their re-growth was due to an act passed by Congress promoting the distribution of excess food that farmers were producing. Some of the older Farmers’ Markets you see today were started around that time--one of them being the Bloomington Farmers’ Market.

What are some opportunities that are coming up for CSAs and Farmers’ Markets to make them more accessible?

Many Farmers’ Markets are now accepting SNAP and WIC benefits. For the past couple of years in Bloomington, the Community Farmers’ Market have provided a program where they double consumers’ market bucks. If you use eighteen dollars of your SNAP benefits at the market--it will be doubled to thirty-six dollars. Through donations and grants, the city has been able to offer that extra supplement to try and make these types of markets more accessible.

Stop by Finch’s Basserie this Tuesday, September 16th at 6:30 pm to hear more about CSA’s and Farmers’ Markets within the Bloomington community. Also, be sure to check the College of Arts and Science’s Themester Event Calendar to view a listing of upcoming lectures and discussions.

Posted by Themester, IU College of Arts and Sciences at Sunday, September 14, 2014 0 comments