Posted by Themester, IU College of Arts and Sciences at Sunday, December 14, 2014 0 comments

“Food on the Home Front: Wartime Production, Preservation and Deprivation on the IU Campus” Exhibit Q&A

Carrie Schwier is Assistant Archivist with University Archives and Records Management and organized the exhibit. 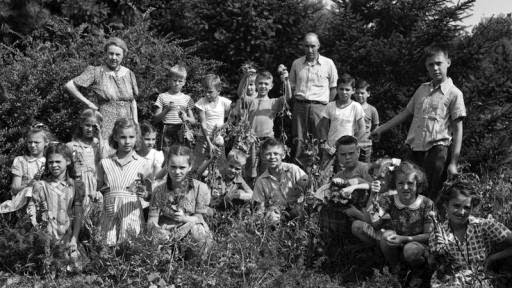 What inspired this exhibit?
Conveniently, this year’s Themester topic on food movements coincides with campus celebrations in observance of the 100th anniversary of WWI. It seemed like an excellent opportunity to tie into both.
In your opinion, which pieces are of most interest? Why?
I think the most interesting parts of the exhibit are the stories of individual students, faculty and community members and how they chose to participate in the war effort. There is the story of sisters Lorena and Dorrit Degner who withdrew from classes during WWI to work on their family’s farm, the Hennel- Henricks family who chronicled their efforts at food preservation through canning, drying and ingredient substitution, and during WWII IU faculty and staff such as Football Coach Bo McMillan and Lee Norvelle who planted gardens on campus and even in their own front yards. I always feel that a local connection to history makes it more accessible to students and in this case the above mentioned students and faculty occupied the same spaces as those of today. I think that link is powerful.
Why will the issues represented apply to students?
With the increase in present-day discussions about the local-food movement, back-yard gardening, and food sustainability it’s important to remember that these aren’t totally *new* topics of consideration. There is always something to be learned from the way our ancestors approached adversity and these same issues. Wartime food-movements also offer an excellent lense from which to explore issues such as community involvement, the role of the university and wartime on the home front.

The “Food on the Home Front” exhibit will be on display at IU Archives until December 19th. The Archives are open weekdays from 8am-5pm.
Posted by Themester, IU College of Arts and Sciences at Sunday, December 07, 2014 0 comments

Vivian Halloran is Associate Professor of American Studies and English at IU and organized the exhibit. 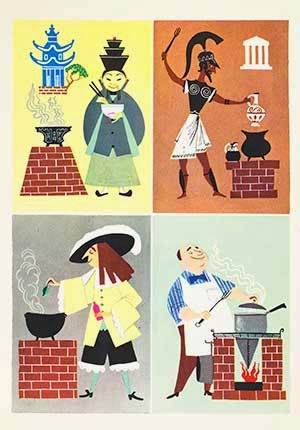 How does this exhibit fit the theme of Themester 2014?

The goal of the exhibit, Book Bites, was to highlight the variety of texts, from plays and travel journals, novels, cookbooks, memoirs and even comic books through which people find the occasion to write about food. The Lilly Library has a vast collection of cookbooks, and I wanted to showcase some of their valuable pieces, but in the context of the other books that talk about multiple aspects of the food industry, including not just eating and cooking, but farming, hunting, and butchering as well.  These topics are quite in line with the theme of Themester 2014, Eat, Drink, Think: Food from Art to Science.

How was the range of texts chosen?​ What qualities were sought? Who looked for them?

I selected all of the texts during the summer.  I spent many hours consulting with the Lilly staff, especially Rebeca Baumann and Jim Canary, who helped out immensely, especially with the layout.  I credit Jim with making the exhibit look so good.

The criteria I used while selecting the texts was the following:  I wanted the first cookbook of American food published in the US, the first cookbook published in Indiana, and the original play that gave us the expression "the melting pot." Then, I ran across the IU Cookbook and used that as a touchstone as well in the first panel since the idea for that was to situate the viewer and the exhibit itself in the nation, the state, and the university.   From there, I wanted a panel to highlight the range of cookbooks available to the home cook to serve as supplements to whatever formal culinary instruction she received at home. The target audience was primarily female at that point, though some instructional manuals began to make the case for men and women to pursue cooking as a profession.  Then, I wanted a case on tastemakers, which highlighted the luminaries in the American cooking scene, another case on food literature and social problems like adulteration in the meat processing system and the Dust Bowl.  Finally, the exhibit culminates by examining current trends in cuisine, such as molecular gastronomy, adapted for the home kitchen.

What can people expect to learn from this exhibit?

People who view the exhibit will learn that there have been vigorous and complex conversations about food safety, ethnic cuisines, farm-to-table, and paying food workers a living wage being carried out through multiple literary genres since the nation's founding. Americans have been "foodies" for a long time, despite the current negative press about the Standard American Diet; our national dedication to thinking about, being entertained by, and advocating on behalf of specific food causes are part and parcel of the food legacy that defines us as the "breadbasket of the world" in more ways than one.