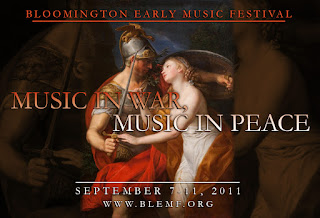 Ubiquitous in times of war and peace, music was used by poor and rich, simple and powerful people to distract themselves from the horrors and exertions of war, but also to beg God for protection, celebrate military achievements, and enjoy times of peace.

The most literal connection between music and war is probably found several art-music "battle pieces" that symbolically capture the soundscape of the battlefield. One of the earliest examples, La Battaglia, composed by Heinrich Isaac (1450-1517), is filled with the ingredients that must have suggested the  last moments of preparation for a war action to the late 15th-century Florentine citizens for whom it was composed. The effects range from the the emphatic and repeated calls and shouts that evoke the chaos of the moment to the brass calls used in the wartime locations to send signals to different contingents of an army and to escort military leaders with a sounding symbol of their rank. The beginning of the piece is a perfect example of musical (and textual) chaos: "To the battle, quick, to the battle, to the battle, quick, everyone get armed with his cuiras and mail, with his cuiras and mail!"

Another famous piece, La Guerre by Clement Jannequin, first published in 1528, attempts a more systematic representation and enlarges the catalogue of battle sounds. Understandably the sub-genre remained fairly circumscribed but did not really died out, as evident in compositions by Matthias Hermann Werrecore, Andrea Gabrieli, and Adriano Banchieri. Certain crucial gestures are still found in the later Combattimento by Claudio Monteverdi from his Ottavo Libro dei Madrigali (1538), famous for the stile concitato, or in Biber's Battalia of 1673, which transposes some of Monteverdi's effects into a purely instrumental realm. Battle pieces, however, are really pieces about war and peace, the former being a terrible reality but also a powerful metaphor. Thus for instance war was used by poets and musicians to describe the condition of the lover, who has to endure all kinds of discomforts and labors to achieve victory or meet with defeat, continuing the ancient trope militat omnis amans (Ovid, Amores, 1.9). (Monteverdi indeed captures musically the remarkable coexistence of real and metaphoric war cleverly devised by Torquato Tasso in the original text.)

Besides imitated trumpet calls and the sounding equivalent of the fog of war, Isaac's Alla battaglia contains long lists of military officers' names. This may seem odd -- why would listeners want to hear name after name declined in a polyphonic piece? -- but really sheds light on the centrality of music to the rituals surrounding war. Isaac's piece was composed as part of a Florentine carnival celebration, but clearly the text was meant to carry a celebratory tone as well. The celebration of victories helped increase the political and military status, and aristocrat and high-ranking citizens participating to warfare were only too happy to be named in a piece. Music rituals surrounding war were of course not limited to celebratory song or to the wind bands mentioned. They included religious celebrations before and after the battle, often accompanied by music -- the Te Deum was a favorite thanksgiving piece, but many motets and Masses were composed as sounding monuments to saintly intercession and divine protection.

The Bloomington Early Music Festival is September 7-11. See website for ticketing information and schedule. Admission is free to IU and Ivy Tech students, and youth under 18.
Posted by Themester, IU College of Arts and Sciences at Thursday, September 08, 2011