Haunting "Last Folio" inspires discussion on the role of artifacts 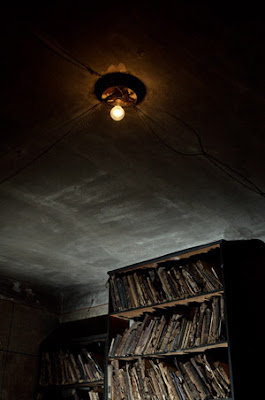 Every time I see Yuri Dojc's haunting photos of the objects left behind in a Slovak Jewish school after the town's Jewish community was deported to concentration camps in 1942, I feel the horror of that moment.  These photos capture the minutia of daily life, the quotidian hustle and bustle of the living, which was so suddenly destroyed.  The photo exhibition,  on display at the Grunwald Gallery of Art until October 1, is also a powerful statement of perseverance and hope.  Despite all attempts to erase any memory of the Jewish community of that town, over sixty years later, the objects are still telling their story—screaming for remembrance.  The exhibit includes as well stunning portraits of Jewish survivors in Slovakia, providing further evidence that life continues beyond war.
At the academic symposium that took place on Thursday, September 1-- the anniversary of the start of World War II--Dojc spoke about his own family and the process of discovery that led him to back to his native Slovakia.  The symposium began with a showing of London-based producer and director Katya Krausova's short documentary film, The Last Folio: The Story of Yuri's Pictures, which chronicles Dojc's photographic expeditions to Slovakia.  The incredible coincidence of finding among the piles of discarded sacred texts, a worn copy of a book stamped with the name of Yuri's own grandfather, shows the interconnections of history.  The film is available for viewing at http://lastfolio.squarespace.com/watch/
The symposium also included a discussion with several IU faculty members who work on related issues.  Ed Linenthal, Professor in the Department of History and editor of the Journal of American History, spoke about the impact of small artifacts in the Smithsonian's Enola Gay exhibition that was to commemorate the 50th anniversary of the end of World War II.

One artifact, in particular, a Japanese school girl's lunch box, aroused controversy by evoking sympathy for the victims of the bombing that ended that terrible war. Dov-Ber Kerler, the Dr. Alice Field Cohn Chair in Yiddish Studies and Professor of Germanic Studies, spoke about his own work interviewing Yiddish speakers in Eastern Europe, and argued that the focus of such scholarship must be on the living.  Mark Roseman, the Pat M. Glazer Chair in Jewish Studies and Professor of History, compared commemoration of the Holocaust in Western and Eastern Europe and spoke about the visceral impact that less-developed Holocaust memorial sites, such as the site of Sobibor, can have on visitors.  The symposium concluded with a general discussion of the role of place and artifacts in memorializing war.
Jeff Veidlinger
Professor, Department of History
Director and Alvin H. Rosenfeld Chair, Jewish Studies Program
IU College of Arts and Sciences

Last Folio: A Photographic Journey with Yuri Dojc will be on display in the newly named Grunwald Gallery (formerly SoFA Gallery) through October 1. A discussion with photographer Yuri Dojc and documentary filmmaker Katya Krausova will be held in the gallery at 5:30 p.m., Friday, September  2. An opening reception will follow.
Posted by Themester, IU College of Arts and Sciences at Friday, September 02, 2011