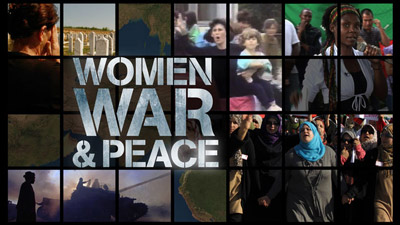 Filmed in conflict zones in Afghanistan, Bosnia, Colombia, and Liberia, Women, War & Peace couldn’t be timelier. As the recent developments in Afghanistan make headlines around the world, Women, War & Peace places women at the center of an urgent dialogue about conflict and security.
Among the women spotlighted are Afghan women’s rights activists who are risking their lives to make sure that women have a seat at the table in peace talks with the Taliban; the courageous Bosnian women who broke history’s great silence and testified about their rape and sexual enslavement, leading to ahistoric court victory; two extraordinary Colombian women who are braving death threats to remain on the gold-rich land that has sustained their community for centuries; and a group of Liberian women, led by activist and Nobel Peace Prize winner Leymah Gbowee, who faced down the killers and brought peace to theircountry.  The Liberian women’s inspiring story is told in the award-winning documentary Pray the Devil Back to Hell, airing for the first time on U.S. television as part of Women, War & Peace.
As Women, War & Peace reveals, the majority of today’s conflicts are not fought by nations and their armies, but rather by gangs, insurgent groups, and warlords armed with small arms and improvised weapons. Women have become primary targets in these conflicts and though they are suffering unprecedented casualties they are simultaneously emerging as critical partners in brokering peace and as leaders in forging new international laws governing conflict. For five consecutive weeks, Women, War & Peace focuses on the under-reported stories of the women who are changing the rules of engagement in conflict hotspots all over the world, reframing our understanding of modern warfare.
To extend public awareness, political debate, and community action around the issues showcased in Women, War & Peace, this series also offers an outreach and audience engagement campaign intended toaugment audiences before, during, and after the series premiere in October 2011. In addition, this fall, Women, War & Peace joins the collection of films offered by Women and Girls Lead  for free community screenings leading up to the series’ premiere. Women and Girls Lead is a multi-year public media initiative to focus, educate, and connect citizens worldwide in support of the issues facing women and girls.