Tell People The Story: The Art of Gustav Potthoff 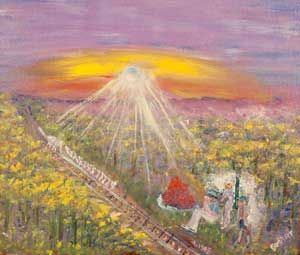 Gustav Potthoff paints to remember his fellow prisoners of war who built the Bridge over the River Kwai and the Hell Fire Pass during World War II. Concerned that those 16,000 fallen soldiers will be forgotten, the artist paints to tell people his story and to find peace among the horrors of war by commemorating those who died while building the Thailand-Burma Railway.
Born in Indonesia and raise in a Dutch colonial orphanage, Gus enlisted as a mechanic for the Netherlands Army Tank Battalion in Bandoeng, Java, in 1941. He was captured by the Imperial Japanese Army soon after his deployment, and remained a prisoner of war until the end of World War II. During his imprisonment, he was subjected to a brutal regimen of labor, which included the construction of the infamous Bridge over the River Kwai and the Hell Fire Pass in the borderlands of Burma and Thailand. He vividly brings to life his war-time experiences on canvas. 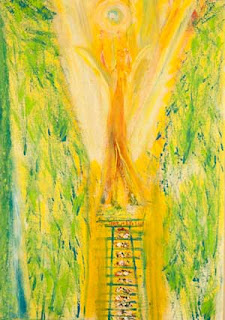 In 1998, Gus returned to Thailand for a Memorial for the POWs who died building the Thailand-Burma Railway. While walking a length of the Hellfire Pass, he pulled out his harmonica and played a song for the souls left behind. As he played, a cloud of beautiful butterflies swarmed around him. He knew those were the spirits of the fallen come to thank him for his remembrance.

When Gus visited the Hellfire Pass, he saw a tree growing in the middle of the pass. The deep cut through the mountain that cost so many lives is slowly being reclaimed by nature. The tree is a symbol of healing in Gus's art.


At home, Gus often sits on his front porch and plays improvised melodies on his harmonica in tribute. Like his paintings, his music is a creative offering to the spirits of his friends. His paintings and songs are gifts that he freely gives so others will remember the lost POWs. When asked why he does not sell his paintings, he explains,

I do my work because I promised to do.

The remembering of friends,
Tell people the story.
And that's what I do [it] for, just tell people story.
Jon Kay
Director
Traditional Arts Indiana
Traditional Arts Indiana will present a special outdoor exhibition at the Indiana Memorial Union Garden, entitled Tell People the Story: The Art of Gustav Potthoff. The exhibit shares the life and work of Gustav Potthoff. The temporary exhibit will be open to the public from Exhibit 10:00 am to 5:00 pm from October 12 through the 16, 2011.

There will be a special “Meet-the-Artist” program at noon on Saturday October 15, 2011. Gustav will be meet and talk to the public at Indiana University's Memorial Union Garden on that day.
Posted by Themester, IU College of Arts and Sciences at Wednesday, October 05, 2011