"The Politics of Midwestern Meat: Labor, Business, and the Environment" Panel Q&A

Dr. Carl Weinberg, Senior Lecturer at College of Arts and Sciences and Adjunct Associate Professor in the Department of History, organized the panel and is moderating the event.

Why did you decide to organize a lecture series on meat industry perspectives? 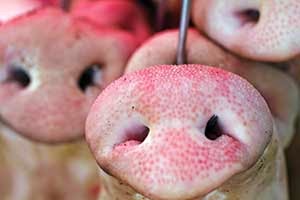 I've been teaching The Meat We Eat for several years as a senior seminar in the Liberal Arts and Management Program (LAMP), and have been taking students on field trips and inviting guest speakers to class.  For instance, we've visited Maple Valley Farm in Monroe County, a sustainable farm, and the JBS/Swift hog processing plant in Louisville. And last spring when I taught the course, Josh Trenary of the Pork Producers and Barbara Sha Cox of Indiana CAFO watch, who tend to see things very differently, to say the least, each came to speak to the class, on separate  days.
But when I found out about this year's Themester theme, I realized I had an opportunity to bring all of these different folks to us and to expand the conversation to include the campus and community. We're still doing field trips, but students and others who attend the event will have the opportunity to hear a diverse range of perspectives from people who are rarely in the same room together.   That's a different kind of experience than hearing and meeting them separately. And hopefully an educational one.

How did you choose speakers to invite?

In addition to including people I had previously invited to class or who had hosted field trips (such as Larry Howard of Maple Valley Farm), I wanted to see if we could hear from someone representing a perspective that is often marginalized in public discussions of the meat industry: the voices of workers. So, I also invited Gary Holland, who was involved in a union organizing drive by United Food and Commercial Workers Local 75 at a pork processing plant in Cincinnati, where workers won their first contract with the company this past spring. It's important to recognize that workers are not simply victims of rough working conditions and low pay, but they are stepping up to do something about it.  And I also invited Indiana State Senator Mark Stoops, who represents Bloomington, and who also has been outspoken in the Indiana General Assembly on some of the issues related to meat and agriculture in Indiana.


What are the foreseeable challenges and successes of bringing these parties together?
One challenge is that each speaker has only a short time to speak and must be willing to entertain questions from the audience on a wide range of topics. And those topics can be intensely controversial. But I expect that the speakers will be fully up to the challenge and that the result will be a civil and thought-provoking conversation. I'm thankful to the speakers for agreeing to do this. Also, we will have plenty time for questions and comments from the audience, and as moderator, I will do everything I can to encourage wide participation.


The Politics of Midwestern Meat panel will take place Thursday, November 13, at 7:30 pm in the IMU's Georgian Room.